3 Reasons Talking to Your Team Is Critical to Your Success 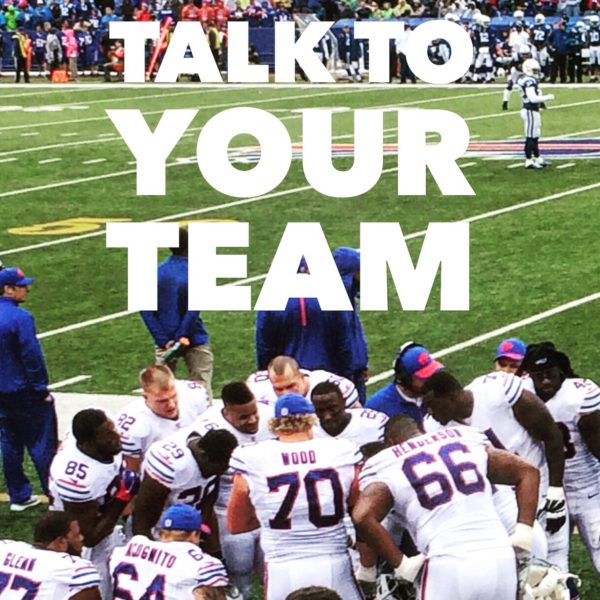 If you watch any sporting event, live or on television, you will see the team members talking with each other. Not all of that talk is helpful (yelling and complaining does nobody any good), but the best teams communicate well and often. The same is true in business. Here are three ways you can use good communication to develop your own winning team.

1) Get information and feedback

Say you’re a small business owner. One of your jobs is to come up with the plans for other people to put into practice. If you talk with your team about the plan, instead of just issuing orders, you can receive valuable feedback, new ideas, and important information. And you’ll gain more respect because you respect your team enough to listen to them. Like a quarterback calling plays—maybe the wide receiver sees something the quarterback didn’t and suggests a change that saves the game.

It’s still up to you to make the final decision, but everyone on the team has a brain and if you can lead in such a way as to bring all those brains to bear, you’ll be a much smarter, much more effective group.

2) Get everyone on the same page

Let’s say the ultimate goal of a particular sports team is to win the division no matter what. That might mean that this year the younger players don’t get much of a chance to play. They’re still valuable team members, helping out in practice and standing by to jump in in case one of the veterans is injured, but this isn’t their year for glory. That’s ok if the coach tells them why.

As an owner or manager, you’ll usually find people willing to take one for the team, but only if they feel included in the group and only if they understand and believe in the ultimate goal. That won’t happen without good communication. You also need everyone to understand the big picture so that they really know when to push, how hard, and in what direction. Everyone has to understand their role. If those younger players think the coach just doesn’t like them, they won’t know to be ready in case a star player goes down. Again, good communication is the key.

3) Talking to your team builds relationships

One thing you always hear about championship winning teams is that they have a close locker room. These teams communicate with each other. Talking builds camaraderie and trust and you see the results on the field. The same goes for business. If you are a sales rep and you don’t trust your support associate, you will not reach your highest potential. If you don’t like your supervisor, you’ll find it hard to stay motivated. If you are a business owner and don’t understand or trust the people working for you, you won’t be able to supervise them well.

Simply put, great teams are built, not found, and part of building a great team is to talk to each other.

As mentioned before, not all talking is productive. Raise concerns as needed, but don’t complain just to complain. Don’t just talk to fill the silence or because you like the sound of your own voice. Listen at least as much as you speak and make sure to speak with a purpose. That being said, be genuine and relaxed in conversation. If you talk only because it is part of some intellectual strategy, your teammates are likely to be put off. The key is to find some genuine caring and interest for your teammates inside yourself–a real desire to communicate. You have to understand why talking to your team really is truly critical to your success.