Despite the negative news you constantly see, there are many positive stories happening in the sports world.

Still feeling depressed by the news?

Sounds like it’s time for another installment of our good-news story collection.

We don’t want you to tune out—if you’re not informed, you can’t get involved and you can’t make the world a better place. So, read the news, starting with these stories, all sure to bring a smile.

The good news is out there, you just have to find it.

The Golden State Warriors get plenty of hate—mostly for winning so often—but the Warriors, like many professional sports teams, offer a lot of good.

Steph Curry is an Under Armor sponsored athlete and is going on to his number-six basketball shoes. There’s a nine-year-old girl who wasn’t too happy about the lack of options for girls like her. So, she sent Curry a handwritten letter. And (much to her surprise, I assume) Curry wrote her back—and also promised her one of the first pairs of Curry 6’s.

Oh, and he invited her to Oakland for a Warriors game. Check out the tweet from Steph Curry. Super cool!

Imagine being a fourteen-year-old boy, going to the mall for your must-have shoes, and the shoes not being available after you were told they would be.

After Foster over-hears the frustration from the mom, he asks the kid if he likes these $200 sneakers…and then, moments later, says they are on him. And then poses for a picture with the boy. What a way to pay it forward.

Plenty of athletes like #Bills WR Robert Foster “pay it forward” this time of year. It’s an amazing tradition. Comment or pass along more stories like this one happening near you these holidays.https://t.co/i4Pss3g1UF

My son and I went to the Utah Jazz/Charlotte Hornets game recently. We are excited about seeing the young superstar, Donovan Mitchell—and Mitchell did not disappoint, scoring 30 points with 6 rebounds and 6 assists. He was the player of the game and rightfully so.

As we were leaving after the game we had to wait for a waitress to give us the bill. She was having an issue and as a result we stayed longer than usual. That’s how we got to be there to see Mitchell give one of his arm sleeves to a fan on the other side of the court. He seemingly does that sort of thing often, so we weren’t surprised.

But as he made his way towards the tunnel, he saw a young fan, and he stopped, took his jersey off, and handed it to the kid.

It was not pre-meditated or scripted, it was just a young basketball player making this young kid’s day. It was a small gesture, but it will be a story this kid will tell for a long time.

I imagine Mitchell has a new super fan.

Below is an image of the jersey handoff. 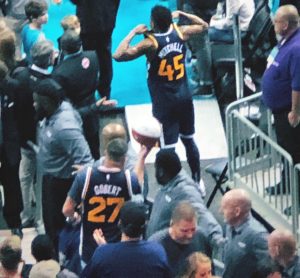 Interested in stories from entrepreneurs? Check out our podcast, Entrepreneur Perspectives.