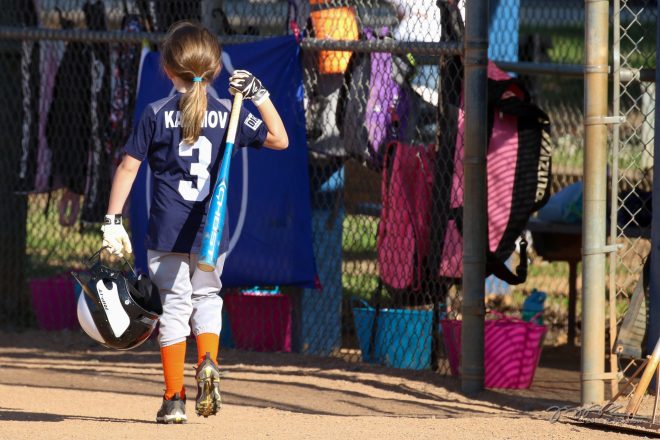 My youngest child just got her first hit of the softball season.

Now, I’m not saying she’s about to join the Woman’s Softball Olympic team. In fact, she might not even play next season, and I’m ok with that. But I’m impressed with her performance, anyway.  Let me tell you why. Let me take you back to the beginning of my daughter’s softball season and tell you the story.

We ask Chloe what sport she wants to play.

“Mom, come outside and see this!”

Official team practice begins, and she loves it because there is gum. Every practice, her coach has gum for any player who wants it. Talk about motivation to come to practice! Gum!

The season starts—and talk about not being close. As they say, you can’t hit it if you don’t swing. And she doesn’t swing. Or, if she does swing, it’s after the pitch hits her. Clearly, the ump would have called that a ball, except in softball there aren’t any. You either hit the ball or you don’t, no walks. Even if the ball hits you, you don’t get a base—especially not if you swing when the ball hits you!

Then there’s that horrible early-season game. It rains the whole time, dreary, almost freezing rain. Why are we here again? The other team is up to bat first, and the ball hits the kid in the leg. Tears…sadness. I hope Chloe doesn’t get hit when it’s her turn (that’s called foreshadowing).

Chloe’s up. The first pitch hits her arm. The second pitch hits her hand. You can imagine how things go from there. Any progress she had made with batting (and there hasn’t been much) is completely wiped away by those two pitches, and no wonder. I don’t blame her for being upset, hit me with a ball twice in the freezing rain and see how I’d like it!

Over the next few weeks, we keep taking her to practice, but she doesn’t enjoy it, except for the gum and seeing her friends. I’d be lying if I said we don’t consider taking her out. Softball can be pretty boring, anyway, with long periods when players have basically nothing to do. Why keep playing a game you don’t love? But we don’t want her quitting. She made a commitment. So, she keeps showing up. We felt it was the right thing to do.

And then something happens.

No, she doesn’t get a hit, but she does get a foul ball. That’s a swing at a pitch and actual contact with the ball. That’s progress.

It’s coming, you can feel it. Her swing is looking good.

Strikeout, strikeout, but gum each time, so it’s okay.

And then it happens…

She has worked her way to batting last in the lineup. That’s what happens in softball when you don’t hit. You earn your way to batting last. But that’s life in the big city. But we’re there. My wife and I are at the game. So is Chloe’s sister. Her brother has homework, so he can’t attend, but he gave her words of encouragement before she left the house this morning.

It feels like an eternity before she gets up to bat. Here she comes. Hitless on the season. Hasn’t even touched a base.

In this league, the girls pitch four times and then the coaches get three pitches. The girl pitching to Chloe can’t get the ball over the plate, so then it’s the coach’s turn.

The first pitch, and Chloe swings… and misses badly! On the second pitch, another swing and a miss, but so close!

The pitcher gets his aim. Chloe gets settled in her stance. Her father (that’s me) does some zooming in with the camera.

A HIT. A big hit, past the pitcher. Chloe drops the bat. Her biggest fans (that’s us) and the other families yell and scream—yeah! Run, run, run!

The throw to first…you can hear my wife not breathe

Her first hit of the season (which included an RBI)… and even the camera zoomed in at the right moment. Someone call Hollywood!

The fun ride continued in the next inning as she got up again and got a double. Easy game, right?

The game ends, but the smile on Chloe’s face continues. The team snack is Oreo Dippers, something my wife (the health food nut) can only roll her eyes at, but this is Chloe’s time!

The game ball is hers.

This is why we wanted her to keep playing, not just so she could have this one moment of success, but because now, every time she struggles with anything, we can remind her of this moment. We can remind her that if she works hard enough and keeps showing up, she can do it.

That’s something we can all remember—who doesn’t have moments when we just don’t seem to be getting it, where something we’re trying to do seems impossible? But those feelings of discouragement are not a prediction of the future. Success will come, like it came for Chloe.

It may seem simple, but sometimes the most important lessons are. If you allow yourself to see the basics, great things will follow.

Chloe teaches me things like this all the time.