The Missteps of the NCAA

When the women’s teams from across the country arrived in San Antonio to compete in the 2021 NCAA Tournament, images and videos went viral of the disparities between what the women were provided in their tournament compared to the men’s NCAA tournament in Indianapolis.

Ali Kershner, sports performance coach at Stanford, posted a side-by-side photo comparing the two weight rooms for the men and women. The women were given one rack of dumbbells going no higher than 30 lbs. and a stack of yoga mats, while the men were given an entire weight room that would resemble a fitness chain. 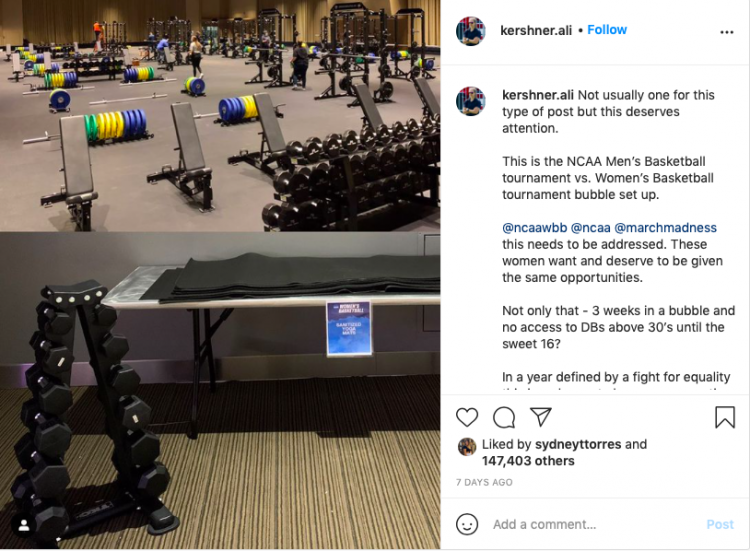 As more images of the weight room situations spiraled out of the NCAA’s control on the internet, the Association said that the problem with the women’s weight room was that there was not enough space to safely social-distance from one another. This sparked more controversy, as more videos were released showing an empty room, one the size of another basketball court, empty and eager to be used. 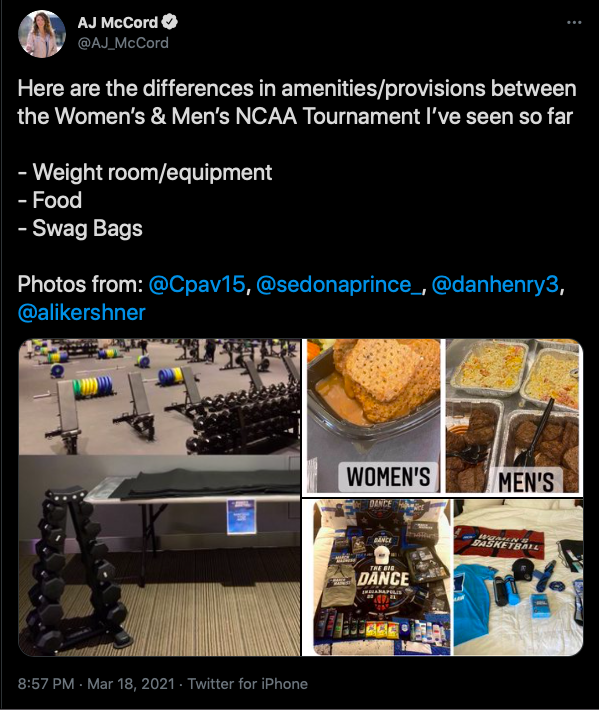 The controversy didn’t stop with the weight room. The men in Indianapolis were given five-course meals while the women were handed pre-packaged meals that looked as if they came straight out of a TV dinner. Even the complimentary “swag bags” to the athletes were of embarrassing differences.

The NCAA has long been guilty of hiding behind Title IX, which, in short, states that the law that shields athletes from gender disparities within their sport does not apply to the NCAA. And while their website states that “it strives to establish an environment free of gender bias”, they have once again failed to do just that.

The long-fought argument over why the NCAA has not contributed any money towards women’s basketball is, supposedly, simple: women’s basketball does not bring in the revenue. However, the NCAA refuses to disclose what the actual revenue and costs are for the women’s tournament and how it compares to the men’s. It would be interesting to see the data from this year’s tournament, as the women’s Sweet Sixteen featuring UConn and Iowa had the two best freshman women in the country competing against each other, with people choosing to stream the women’s game over the men’s being played at the same time.

While the argument is constantly that women don’t drive in the revenue for the NCAA, if they are constantly denied the opportunity to prove themselves, nothing will change, and history will continue to repeat itself. The situation in San Antonio is a disgrace to the fight for gender equality. And unless more investors and sponsors step up when the rest of the world isn’t watching and the NCAA gets their act together with equal opportunities for all genders, then each tournament moving forward will continue to struggle to progress.

Check out Alana D’Andrade’s stories around sports tech innovation as told on the SE Podcast.

Kimberly Bates
PrevPreviousInside the Business of the NFL with Michael Lombardi and AJ Vaynerchuk
NextIs Being a White Sox Fan Driving Me Insane?Next