The WNBA and Nike released the new jerseys the women of each 12 teams will wear in the 2021 season – and they are powerful.

The league is heading into their 25th season – marking 25 years of empowering women through sport and shattering every glass ceiling meant to box women out of equal opportunities. The WNBA partnered with the dominant athletic brand in 2018 to design the league’s game jerseys because of their dedication to take action and improve the conditions of female athletes. 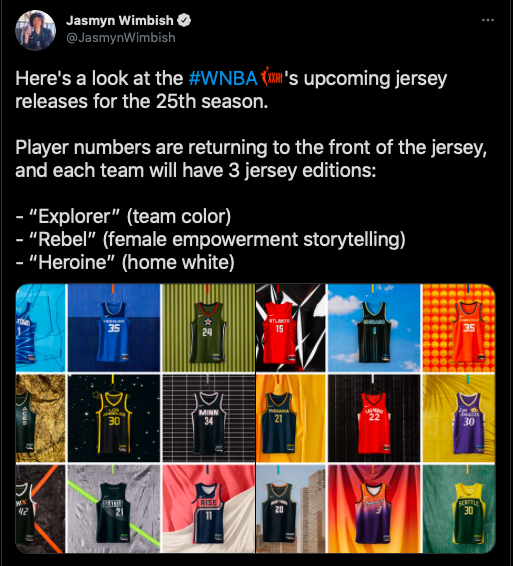 In Nike’s press release, they stated that “there was clearly more to be done.” The brand partnered with different WNBA players to hear what they wanted out of their uniforms. Nike then created more inclusive sizing for the uniforms that are meant to fit the women, rather than making the women fit into them.

Another important change is that the players’ numbers are returning to the front of the jerseys. WNBA jerseys have left the women’s numbers off of the front of the jersey for a few years so that they could fit bigger advertisements in their place, but with expansion in mind, they wanted to give the players more of an opportunity for fans, referees, and TV streams to identify them.

The stories are unique to each city and each group of women. The Chicago Sky’s “Rebel” jerseys feature a shattered glass design, representing the glass ceilings the women shatter every day, on and off the court. The Connecticut Sun’s “Explorer” jersey represents the state’s Indigenous people, with a sunlit theme giving respects to the Mohegan Tribe.

Seattle Storm point guard Sue Bird stated that she is proud to wear Nike’s uniform because of the brand’s attention to detail and the women’s personal style, per Nike’s press release.

Nike’s steps in representing and telling the stories of women are not just about the women wearing the jerseys, but every woman that’s ever had a voice taken from them or kept inside of a seemingly unbreakable box.

This is an inspiration to future female athletes, something these current women may not have had or seen when they, too, were once big dreamers. WNBA star Sheryl Swoopes told Front Office Sports that she never had the dream of becoming a WNBA player because she never knew it was possible, but now Nike is making this possible for young girls everywhere.

Nike is also investing money into girls’ sports camps throughout the world, while still holding up their Let Me Play campaign. The brand has partnered with communities to create grassroots programs to inspire today’s youth to become our future powerful women.

While the WNBA has yet to announce the start of the 2021 season, the league has built up so much momentum in the last few seasons that viewership grew by 50 percent just last season. The women’s game is growing and one thing is for certain – the best is yet to come.

Did you know we produce podcasts? If you ever thought of starting a podcast, you should. We’ll help you! Let’s connect!

Like this WNBA new jersey drop piece? Then you’ll want to check out Kimberly’s article on the NCAA missteps.