Simone Biles, one of the most decorated gymnasts in the world, left her sponsorship with Nike for the female-led brand Athleta last week, just three months before the 2021Tokyo Olympics. While it may seem like a simple change-of-contracts to some, Biles is paving the way for female-athletes to choose their sponsorships based on representation versus compensation.

Biles first signed with Nike in 2015 when she opted out of the college route and decided to become a professional gymnast. But despite Biles being the greatest gymnast of all time, she hasn’t been the face of the sportswear juggernaut for years.

In an interview with the Wall Street Journal, Biles said switching to Athleta was an easy choice, as she believes the brand represents diversity and inclusion for all women, no matter the size, age, race, religion, and abilities.

Biles told WSJ that growing up she believed that Nike was a brand that would best represent female athletes, but as she grew up she learned new things about herself and the world around her, recognizing it was “time for a change.”

Athleta, owned by Gap, was founded in 1998 and is 97% led by females. Biles wouldn’t criticize Nike in their support, or lack thereof, of women, but said that she truly believes that Athleta is a brand by women, for women.

Biles is the second Olympic superstar to leave Nike for Athleta. Allyson Felix, Olympian sprinter, joined Athleta in 2019 after Nike failed to support her during her maternity leave and the months after. 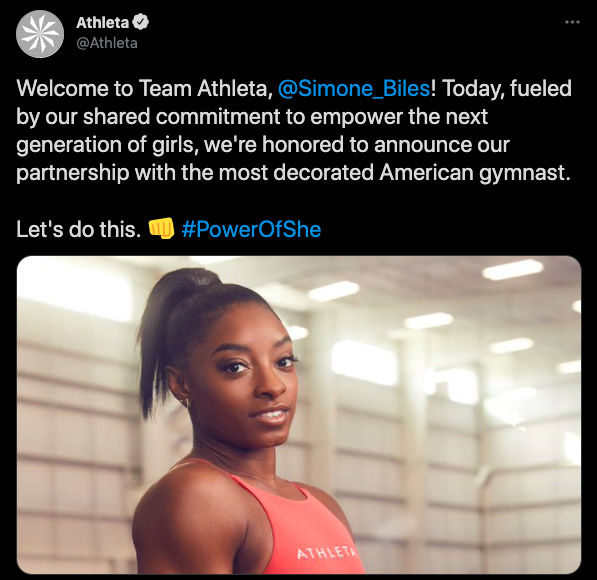 Nike has been widely criticized for the lack of support they give their female athletes behind closed doors, despite their continuous public efforts of support young girls through their athletics and changing their policies on maternity leave and pay guarantee for pregnant female athletes.

This news comes after Nike partnered with the WNBA to create the league’s new jerseys for the 2021 season, which made powerful statements for the teams and their home cities.

Nike also just announced last week that their sneaker partnership with Kobe Bryant was not renewed, due to Kobe’s sneakers being “low priority” in sales — however, nearly a fifth of NBA players wore Kobe’s signature shoe last season. Vanessa Bryant, Kobe’s widow, is reportedly looking to launch Kobe’s own brand under the radar.

Athleta has promised to support Biles in and out of the gymnasium, including a post-Olympic tour that will give her the financial support to undermine USA Gymnastics, the organization that failed to keep Biles and many other girls and women safe from Larry Nassar.

Simone Biles will also be able to create her own athleisure line with Athleta, something she wasn’t able to do at Nike.

The fallout with Biles and other elite-level athletes could be detrimental for Nike, as one of the main goals for sponsoring Olympic athletes is to demonstrate the level of elite performance their athletic wear can provide for the world’s most superior athletes.

Biles and Felix are the first of many dynamic, strong women Athleta will sponsor, giving them back their voice and power that they once felt like was taken from them. These women are making moves in the world of athletic sponsorships and there is only more to come.

Do you enjoy content around Women’s Sports? Check out this article about the WNBA Jersey Drop.