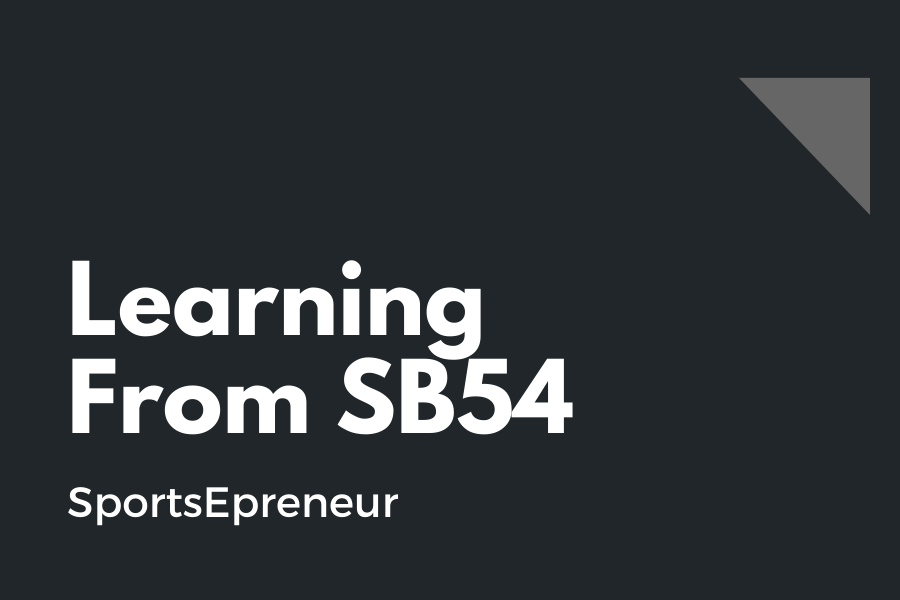 As we look back on the 2020 Super Bowl, we can’t help but look for ways to learn from it. While these aren’t lessons for us to teach our favorite teams how to make it to the Super Bowl (as I doubt they’d listen anyway), we do see ways for anyone to learn from the Super Bowl event that 102 million people watched — and apply to our own worlds.

Before we get into Super Bowl lessons, we first take a quick look at our teams’ possibilities for next year. Here’s a quick hit on some of the teams our people pull for.

Sam Darnold has upside. But Adam Gase scares me. The Patriots are still in their division and Buffalo seems to be a bit higher on the totem pole right now. The Jets could make moves to climb higher, but I’m not seeing a Super Bowl 55 appearance for the J E T S JETS JETS JETS. 2020-21 will be all about Darnold’s development and the Jets establishing themselves as a contender in the AFC East.

I’m not a Bills’ optimist, meaning I’m not on board with everything they do–but they have improved, that much is certain. I used to be that Bills optimist! But 17 years of that and nothing to show for it will turn anyone. As I said, the Bills showed hope but while the Bills may be better next year, their schedule will be significantly more challenging. If Josh Allen takes a huge step this offseason, they will have Billievers. And of course, #BIllsMafia always believes. I’m not seeing it, mostly because of their schedule. Imagine playing Rookie mode in Madden and then going into Pro Bowl mode?

The Steeler defense of 2019 was excellent, but losing a key running back and wide receiver followed by an injury to their franchise quarterback proved too much to overcome. Big Ben comes back in 2020. They always seem to be in the mix and 2020 should be no different. Next to Buffalo, Pittsburgh has the best chance to at least be in the conversation–among these teams.

So much depends on Cam Newton. Like him or not, he gives the Panthers a chance of success in 2020. So we reserve the right to re-visit this topic. Without Cam Newton, it looks like Panthers’ owner Dave Tepper may be re-building this team. We expect big things for the Panthers, but not in 2020. Again, it depends on who their quarterback is.

Now onto a team that did win it and some lessons to go with it.

Early in the game, it seemed there was a lot of conservative behavior on offense. Playcalling and execution made the game boring. Perhaps this kept both teams in the game. And perhaps both were just waiting to make their move. There’s something to be said for that. But this was the Super Bowl. It’s no surprise that the team that opened it up a bit more (because they had to) came away champions.

Application to business | Don’t sit back. Make that call. Ask for the business. Go all-in on that new thing you want to learn. Think big. Win big.

Getting Oh So Close is Super Motivating

The Kansas City Chiefs were an overtime possession away from playing in Super Bowl 53. Getting that close to only lose is heartbreaking. Except it’s motivating for the next year. We’ve talked about this before with the North Carolina Tarheels, Kansas City Royals, and Clemson Tigers. Now teams get close all the time and don’t come back to win it the next year–but then there are teams that do–like the Chiefs. More on this one at the bottom of this article.

Application to business | Identify those losses. Realize it stinks. Do something about it. Work harder and come back stronger. And then realize without that loss, you wouldn’t have success.

The patience factor goes to Patrick Mahomes and Andy Reid. Mahomes is only 24, so by age alone, he didn’t have to be patient, but in a world where immediate gratification seems to always be a desire, Mahomes ways able to sit and watch for an entire season. Andy Reid, on the other hand, had come close before with his former team the Philadelphia Eagles and his current team, the Chiefs. People doubted him–can he win the big one? Well, he won it. I’m sure he’d rather have won some before too. But it didn’t happen. That didn’t stop Reid from continuing his pursuit.

Application to business | You may not win early. You may have to sit back. It may take longer than expected. But patience and a lot of mental toughness and hard work provide an opportunity for whatever it is you are after.

The Chiefs were down late in the game. In fact, they were down 10 points with under 12 minutes to go. And then Patrick Mahomes threw an interception. I think there were many people that thought “this game is over.” If you watched the way the 49ers celebrated you might even think some of their players thought “we’re gonna win!” The Chiefs didn’t flinch.

Application to business | You are going to have ups and downs. We all do. Realize the downs will turn to ups if you don’t flinch. It’s easier said than done. Trust me, I work on this often–remember, a lot of this is self-talk.

Watching Mahomes do whatever it took to get 1st Downs–there was something about it. It seemed like Mahomes was just not going to let his team lose. Now there were many other players making plays and giving incredible effort–even the 49ers had that. Re-watch the game and watch Nick Bosa leave it all on the field. So it’s no wonder this game was close. The effort while obvious (I mean, this is the Super Bowl after all) still gives us a simple thing to focus on–extreme effort.

Application to business | It seems easy, but work your tail off. Pick up the phone. Do more than you think are able to do. Push yourself.

Surround Yourself with the Right Pieces

The Chiefs may have Mahomes, they may have Andy Reid, but so much of this team is about surrounding their quarterback with the right pieces. A great offensive line, wide receivers, multiple running backs, and an opportunistic defense. Mahomes may be their best players, he may be the MVP, but he doesn’t do it without key pieces.

Application to business | This is an obvious one, but it can’t go unmentioned. Surround yourself and your key players with the right people.

If I am picking any one lesson that was more important than all the others it is the “Getting Oh So Close is Super Motivating”. Now, this next statement isn’t an I told you so, but I felt that the Chiefs would win because Mahomes would make the plays when needed and most importantly, that the taste of bitter defeat one season ago would be the biggest factor.

The San Francisco 49ers were one of the worst teams in the league the previous season. That’s why they were able to draft Nick Bosa from Ohio State with the 2nd pick overall. It’s not to say that players and coaches on the 49ers haven’t been close to winning before–just look at Kyle Shanahan with his time on the Atlanta Falcons. Remember they blew the late lead to the New England Patriots. But as a team, the 49ers hadn’t been there. The Chiefs had. And that bitter taste was, in my opinion, a deciding factor. For sure, talent matters, so the Chiefs could have been as motivated as they want to be, but if Mahomes had been knocked out for the season in October, they would not have won the Super Bowl.

As we go into the 2020-21 season, the 49ers now have this bitter taste, they have the super-motivation. Can they use it to get them back to the big game or will they suffer the Super Bowl Hangover? With their young team, their elite defensive line, and an opportunity to grow, I’d tell you to expect the 49ers to put themselves back in the mix next year.

Application to business | Have you ever come close to something you wanted? I imagine so. If not, think harder cause you have. Use that motivation to drive new and better habits. Because it can work. Ask the Chiefs.

What super bowl business lessons did you takeaway?

Do you like podcasts about sports and entrepreneurship? Then check out our SE Podcast?