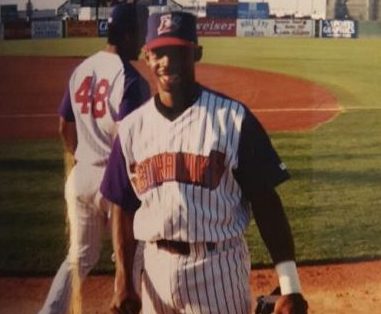 Playing baseball has opened the opportunity to help others

At twelve years old I walked onto a baseball field. I stayed until I was twenty-six.  I had always wanted to be a professional ball player, and that dream came true for six years.  I never made it to the Majors, but I worked hard and I played hard and I loved every minute of it—until I didn’t. The toughest part of my professional career was when it seemed like my hard work wasn’t getting me anywhere, that nobody even noticed. The sour taste left in my mouth led me to not even watch baseball from 2002, when I left, until the Giants’ World Series win, in 2010.

But what I realized during those years when I wanted nothing to do with the game is that baseball had taught me some valuable life lessons—and I can pass these lessons on to young people as a coach and mentor.

I don’t consider myself an expert in any field, not even baseball. I’m just more experienced than the youth I coach. I’ve been where they are, and I have been where they want to be. I have a reference point that they—and even most of their parents—lack. Basically, I’m a random guy who got to play a game he loved professionally for a few years, and somebody noticed and asked me to share some of the things I’ve learned.

Professional baseball can be a bit unforgiving. The game couldn’t care less about your feelings–I had to learn that the hard way. So how do you do your best, and even enjoy what you’re doing, when the people around you aren’t necessarily on your side? I had to learn that the hard way, too. I often tell my son that he can take advantage of my experiences, that he doesn’t have to make the same mistakes I made—he can go make his own mistakes, and learn from them, and then share what he learns with his own kids someday. I talk like this with my son and with the young people I coach because I believe it’s valuable to share my experiences, both positive and negative. It’s what I have to give.

I tell them that there is a way to handle yourself, in life and on a baseball field.  Hard work pays off everywhere, even when it’s being overlooked. You don’t need somebody to tell you that what you do matters—it matters anyway. Go out and work and grind as if tomorrow everything may be taken away, yet be patient enough to wait for your time.

The guys on my team get a constant reminder from Coach Harv to get better every day.  There are no days off.  Everything is earned and nothing is given.  I let them know that as they get older, the game becomes more political. That’s just the way it goes. It’s part of the business.  The more they understand that their effort has to remain constant anyway, the better.  The one day they get frustrated and just go through the motions on the baseball field is the day they could’ve landed that full-ride scholarship they desired. I refuse to keep the difficult, frustrating parts of the game away from them.  If they don’t want to keep putting in the work anyway, there is no point in playing.  I’d rather a young man find something else to do than only go through the motions on the baseball field.

To be honest with you, I enjoy coaching and mentoring as much as I enjoyed playing the game.  My desire would be for many of the young men I coach to make it to the professional level, as I did, but make it further. Stay in longer. Make it to the Majors. Then they can come back and tell me about their experiences–and maybe even pass on the trade secrets to the youth after them.

When the young men I coach hear me speak about the hard parts of my career, they ask questions. Answering those questions honestly has been a liberating experience. It still boggles my mind that they don’t care that I never made it to the Major Leagues. They think it’s the coolest thing ever that I spent time in the same locker room with Ken Griffey Jr. and Alex Rodriguez. And it was pretty awesome.  It feels, at times, as if my professional baseball career has just started again.

Like I said, I’m not an expert, I’m just a random guy who used to play professional baseball. I went farther in my athletic career than some people, but not as far as others. But for the kids I coach, I get to be cool—and I get to teach them things they can use for the rest of their lives, whether they ever play baseball professionally or not.

No matter where you have been and what you have experienced, the information and experience you have gained along the way can be valuable to others.

image of me (Harvey), playing baseball.